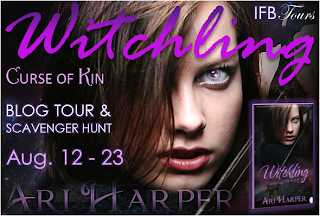 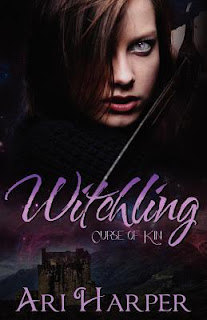 Nera is a normal teenage girl living in Ireland-or so she thought. Her world is forever changed when she discovers that she is descended from a long line of witches. To her horror she finds she is the one that is supposed to stop the curse that has taken the life of every girl before her. As if that isn't enough, she must learn to use magic and her trainer is a man named Bones. He is the son of Mari, Queen of the Witches, and a god. It is Bones that has been entrusted to teach her the skills she needs to stay alive, which wouldn't be so bad if he didn't have an uncanny knack for pushing her buttons. Can Nera learn what she needs while staying immune to the charms of the man that gets under her skin at every opportunity? 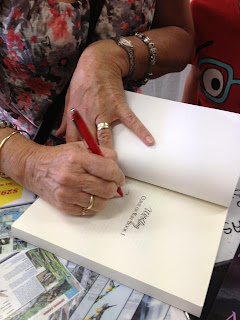 Ari Harper never wanted to grow up.
To offset the limitations of aging ungracefully, she created her own set of unique worlds where she can be and do whatever she wants.


Gods, witches and demons surround Ari while she spins her magic, doing mainly what they tell her to do. Given a chance, she prefers to work amongst chaos, which is good because she is constantly surrounded by children, all clamoring for attention. Some of them end up in her stories, some of them even get to die grisly deaths or be cast away to another realm.
www.ariharper.com

The smell of smoke pricked at my nostrils and dragged my concentration away from my math test. I looked sideways and watched it swirl over the floor like a silent, deadly serpent, coil- ing around the desks and feet of my classmates. I listened for the crackle that accompanied the smoke and saw the flames licking along the floorboards. Cold sweat broke out on my neck and ran down my spine, galvanizing me out of my chair.

He looked up from his desk. “Nera, please go back to your seat and finish your test,” he said, his brow wrinkled in a frown.

My mouth worked as I tried to get the words out, but they re- fused to budge past my burning throat. Changing track, I turned toward the door in a blind frenzy. I had to get out! Tears were pouring down my cheeks, blurring my vision, and I could hardly breathe for the smoke that surrounded me. I reached for the door handle and jerked my hand away as the hot metal burned my palm.

“Nera, what are you doing?” Mr. Devon hurried toward me.

I slumped to the floor, burned and struggling for breath.

“Brie, get the headmistress!”

I pulled my body into a ball and opened my mouth in a half- hearted attempt to scream. Somehow I knew that the pain in my throat would only get worse if I tried, so I closed it again. The kids crowded around me, oblivious to the flames engulfing the room. Their voices faded away, and I sank deeper into my own little dark hole.

When I resurfaced from my inner retreat, I forced my eyelids open a crack. The voices in the room were loud after the silence of my own mind. I was in the headmistress’s office lying on my side on the old threadbare brown couch, its scratchy fabric prickling my cheek. Dad was kneeling down beside me.

“Nera, honey, are you okay?” he asked as he stroked my hair from my eyes.

“I don’t know,” I whispered, my voice cracking.
Posted by Unknown